This year the annual AHRC North West Consortium Doctoral Training Partnership’s Annual Conference was held at the Royal Northern College of Music in Manchester between the 19th and 20th October 2016.

What exactly is ‘making meaning’? What does it mean to ‘think’ historically? And how do we ‘make meaning from the act of making’? These are the questions the NWCDTP Conference: Thinking, Making and Meaning attempted to answer. The conference brought together a national funding body, the networks attached to it, and the local communities and individuals – both educators, students and collaborators – together, each with their own research questions, objectives, expectations, experiences, emotions, backgrounds, disciplines and opinions.

Networking reined primarily at the conference – as students just starting, completing, or finished their research met with experienced and new educators across the national funding council. It was here that I realised that ‘Nuclear Culture’ and all the theories, methods and ideas that surround it, stretch far beyond the limited landscape I had envisioned beforehand.

At the conference, we heard from the Director & Deputy Director of the NWCDTP introducing us, as the new cohorts, to the mammoth, regional scheme to support and produce ‘the new researchers of today’. The Director reflected upon our proposals, and how we had been selected not just based on our academic abilities, networks and passion for our disciplines, but because we were going to engage with the wider public. At first I thought this was strange: for by nature our thesis’ will be personal, a personal journey of research, development and academia that will contribute to wider human knowledge. How can we possibly project something so specific, so complex, and so personal, onto the wider public? How could we ‘make’ our research into something that anyone could ‘make meaning’ from it – so to speak.

The Director instructed the new cohort to introduce themselves, and their research, to as many people as possible and form a group with people researching something similar. After a brief scramble, I found myself sitting in a large group of other students, all of whom were united by an interest with place and community. Suddenly, my interest in nuclear cities was interlinked with many other disciplines: Poetry, English, Dance, Archeology, Religion, Film. All of which sought to use the same methods as me to make meanings in our research. It was then I realised the true benefit of working within a consortium, the connections. Sitting in a group of fellow researchers, with the same interests but different disciplines, time periods, theories and objectives, made me see how many bridges I could cross to reach my end goal and the proposition of collaboration where I had perhaps not seen it previously.

And thus, we heard the legacies of the NWCDTP from current, final and finished students themselves. We heard how archives were being used, challenged and analysed in new ways, how new connections to museums were set up and how the NWCDTP could provide museums with new resources and contracts through placements and small research projects. We heard how development skills bridging many sectors could be mutually enhancing, such as marrying American Finance and Gothic Literature. We learned of new ways to engage with material objects – how to identify with them, understand them and see the complex ‘meanings’ that entangle seemingly ordinary objects such as photos, wardrobes and textiles. We were introduced to the NWCDTP’s passion for public engagement, for blog writing, public speaking, conferences and workshops and most importantly how to make research not only meaningful for academia, but how to make it meaningful to the public. In this way, the NWCDTP sought to stretch its influence to local communities and other participants across the world. We were introduced to philosophical advancements in understanding the body, horror, uncertainty and ideology, and practical advancements in the use of linguistics, Google Ngram & corpus programmes. The conference was a celebration, and an introduction, to the consortium’s legacies and future endeavours. 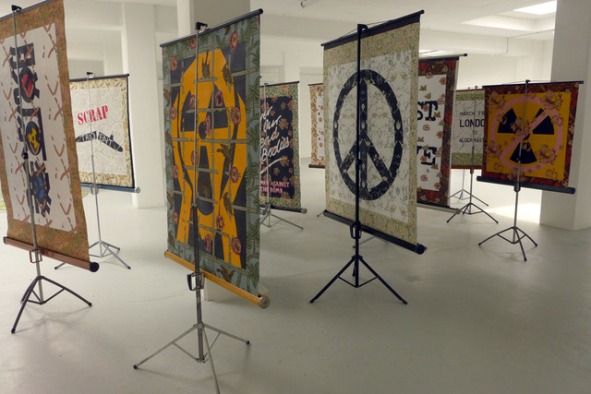 I was subsequently left with the questions: How could I ‘make meaning’ with my research? How does it create ‘meaning’ through ‘making’? Are there new ways of ‘thinking’ about nuclear culture and nuclear anxiety that I have not considered? I thought of how I would ‘make’ history conducting oral history interviews, and how meaning would be created through analysis and memory. How I would draw ‘meaning’ from other historiography, from newspaper articles and testimonies. How meaning is not only created by the historian, but also by the reader, the participants, the memories that form the research. Imagination, Emotions, Visibility, Anxiety, Memory, Experience; these are all territories historians are starting to explore deeply, but I feel we should also consider the question: How, and why, do historians ‘make’ and identify particular meanings in physical and mental historical world.

Thank you for the AHRC NWCDTP for inviting me for the conference: I would also like to highlight the academics and workshops I attended during the conference, all of which were extraordinarily fascinating and engaging.
– Unfolding the Archive by Jo Darnley (Manchester Metropolitan University)
– Writing through the Fragments: Ekphrastic Encounters with Michael Landy’s Breakdown by Lindsay Polly Crisp (Goldsmiths, University of London)
– Dorcas Stories: Archives as Mechanisms of Creating and Meaning by Rose Sinclair (Goldsmiths, University of London)
– Public Speaking by Dr Margarida Dolan (International Consultant)
– Keynote Speeches by Dr Scott Thurson (University of Salford) and Professor Leon Cruickshank (Lancaster University)
– Making Meaning from MERZ: A Cultural Moving Target by Jackie Haynes (University of Cumbria)
– Relations by William Titley (Manchester Metropolitan Univerisity)
– Making and Breaking the Bronze Age by Matthew G. Knight (University of Exeter)
– Tracing out the Textual Waive: Women and (out)laws in Pre-modern England by Bethany Jones (University of Lancaster)
– Impure Knowledge’s of the Writing Bodylies: The case of Leonid Lipavsky’s “Research into Horror” by Mariia Semashyna
– It’s an Art: Using Digital Humanities to draw meaning from texts by Emma Franklin (Lancaster University)
– New Labour, Same Old Neo-Liberal Danger: Ideology, and New Labour’s Reforms to the NHS by David Ian Benhow (Keele University)
– The Giant Vampire Squid in the room: Gothic Finance and Financial Gothic, Revealing Spectral Capital as the Ghost of American-Gothic by Amy Bride (University of Manchester)
– Choosing Futures: Calculation as Fiction in Risk Management by Conrad Moriarty-Cole (Goldsmiths, University of London)