Feel free to check out my time line here if you want to see what happened in the United Kingdom (and the world) regarding nuclear weapons in the 1950s.

Liverpool’s local newspaper, the Liverpool Echo reported on a number of anxieties regarding nuclear weapons, throughout 1952 – 1989. The content between 1952 and 1982 was particularly different and this may have been due to the outbreak of war and thus the media diverting attention outside of Britain. Thus, the nuclear bomb shifted from a perhaps more internal presence (as internal as Australia gets) to an invisible, outside presence.

It seems apparent that circumstance has much to do with media publication and raising anxieties in the community. The early months of 1952 were leading up to the first British nuclear test in October. Thus, the nuclear bomb was on everyone’s mind, and yet little was reported in terms of worries or anxieties about what the test would mean for Britain. [1] [2] Instead, the bomb was presented in the press as a national icon, of strength, power and control of the international backdrop.

In 1982 however, thirty years later, the Falklands war has just been declared, which diverted many newspapers and the media towards the conflict rather than nuclear bombs.[3] In both cases, the nuclear bomb was seen as a  national symbol. in 1952 it was a message of British strength and expertise, becoming a member of the “nuclear club” and thus had to be presented as a desirable thing. 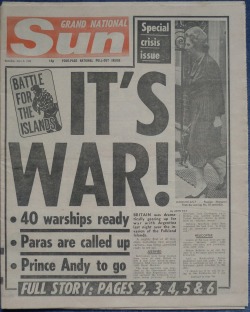 In contract, during the 80s, war was declared and nuclear bombs had to retreat back into the discourse of “bombs” and “bombing”, but remained a symbol of superiority in the globe. Being a ‘have’ rather than a ‘have-not’ in nuclear weapons during war meant that your enemy would always be “thinking the unthinkable” during combat – could they really use a nuclear bomb?

It is interesting to me that the nuclear bomb transformed from something visible and imaginable (mushroom clouds, images of nuclear testing, becoming a symbol of pride and national strength) into something invisible and unimaginable. When the bomb was tested, its use was imminent, as nuclear tests became an embodiment of national strength, and yet when war was declared, the bomb drifted back into the backs of peoples minds – Could they really use it?

Here are a couple of article examples from the Liverpool Echo, 1952.

It is seemingly ironic that nuclear weapons tests are reported so frequently and positively in the Liverpool Echo as the newspaper becomes fairly anti-nuclear in the 80s, protecting the Greenham women (calling them angels and heroines) and resenting Thather’s nuclear policies.

Yet in 1952, they refer to our nuclear bomb, praising the weapon, and calling it ‘national importance‘. They is even implications of pride in an article which speculates Merseyside ships will be used for transport during the nuclear test. Thus it seems that not only place is important in the expression of nuclear anxieties but time is also an important factor to consider.

[1] See, L. Arnold, Britain and the H-bomb (Basingstoke: Palgrave, 2001), A. Bingham, ‘The Monster? The British Popular Press and Nuclear Culture, 1945-early 1960s’, The British Journal for the History of Science, 45.4 (December 2012), pp. 609-624. Please also see, L. McEnaney, Civil Defense begins at home: Militarization meets everyday life in the fifties. Princeton, N. J.: Princeton University Press, 2000 as this small snippet of information points to her hypothesis, that the militarization of the United Kingdom, and its entry into nuclear status became enveloped in everyday life.